Arguably one of the greatest hip-hop acts of all time, Public Enemy has supported vinyl since the very beginning. So when Chuck D. and company approached DoradoPkg about printing not one but three of their forthcoming releases, we were thrilled!

Dorado worked with Public Enemy on re-prints of three seminal albums, including “Most of My Heroes Still Don’t Appear on No Stamp,” a 12-inch wide spine jacket, “The Evil Empire of Everything,” also a 12-inch wide spine jacket that was originally released last fall, and the over-sized 7-inch record jacket for the corresponding single, “… Everything.” 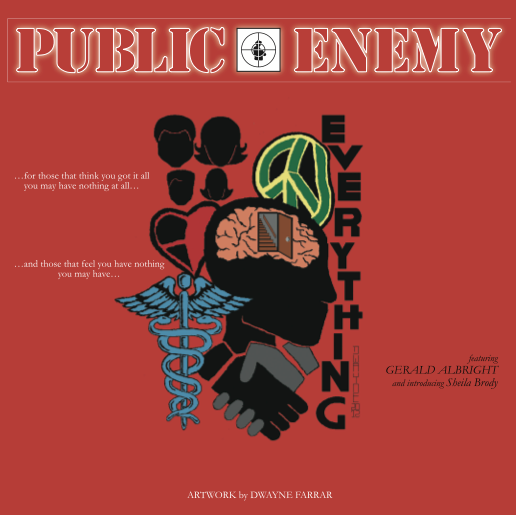 While each album cover includes some incredible art, perhaps the most inspiring is that for the “… Everything.” 7-inch. Public Enemy worked with graphic designer Dwayne Farrar on the single’s cover art. Dwayne’s story is a remarkable one. Battling the effects of Muscular Dystrophy, Dwayne created the artwork in September of 2012 with limited to no use of his hands, yielding incredible results. Check out the cover-art to the left and read the full story on Public Enemy’s website by CLICKING HERE.